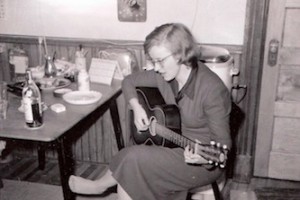 Connie Converse deliberately disappeared in 1974. An unappreciated songwriter, decades ahead of her time, she was never seen again. Now, 40 years after her disappearance, we invite you to an evening of music and film, celebrating Connie and the kitchen recordings she made in 1950s New York.

Elizabeth Eaton ‘Connie’ Converse was born in 1924 in New Hampshire, the daughter of a Baptist Minister. She was an award-winning high school student, valedictorian of her class, and won a full college scholarship. But after two years of college, Connie dropped out and headed for New York. It was there, in 50s Greenwich Village, that she started writing songs and playing them for friends at parties.

Amateur recording engineer Gene Deitch took notice and made recordings of Connie in his kitchen and, although she managed a single TV appearance, it seemed the rest of the world wasn’t ready for her; Connie’s music just didn’t fit. She left New York and settled in Michigan with family. But later, at the age of 50, a depressed Connie packed up her VW bug, left letters saying that she needed to make a new start, and drove away forever. If she is alive today, Connie is turning 90 in August.

Connie’s recordings were rediscovered and released in 2009. For Sensoria Festival 2014, critically-acclaimed songwriter, singer and guitarist Nat Johnson will be writing and performing new arrangements of several of Connie’s songs, with accompaniment from members of Stannington Brass Band, plus Nat’s regular accompanying musicians Hannah Browne, Katherine Jackson and Oliver Allchin, Neil Piper and Chris Loftus. They will also perform original songs that Nat has written about Connie.

Andrea Kannes, a film graduate from New York, will be screening her debut documentary “We Lived Alone”. Andrea visited Connie’s family and was given access to Connie’s filing cabinet to make the film, uncovering not just more music, but artwork and letters. Nat and Andrea will also be discussing Connie’s life and work and the effect it has had on them both. The event takes place in the historic surroundings of Cutlers’ Hall, Sheffield City Centre.

This entry was posted in Film, Music, News, Programme. Bookmark the permalink.

at Venues across Sheffield